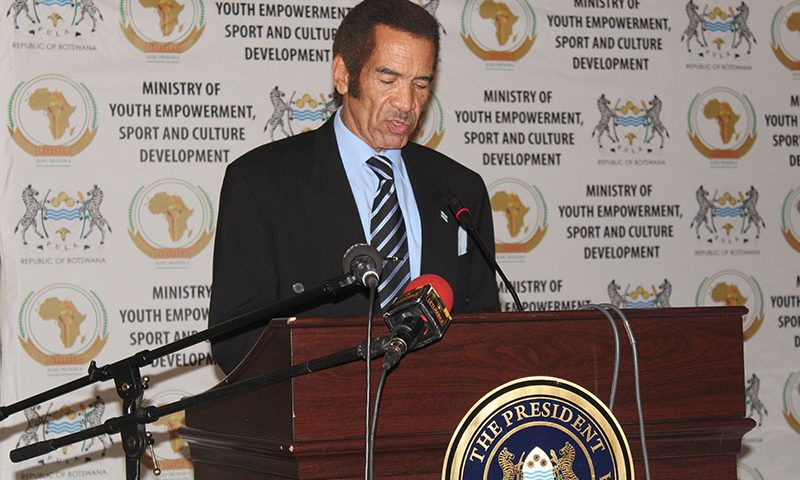 The 10 Member States of AUSC Region 5 Ministers gathered in Gaborone, Botswana in the biyearly Council of Sports Ministers meeting to deliberate sports development agenda as a collective and the only progressive countries in AU Sport Council regions. The ministers that attended the meetings were Angola, the outgoing chairperson of the Troika, Lesotho, Namibia, Malawi, Swaziland, South Africa, Zambia and Zimbabwe. And of course the host minister, Hon Thapelo Olopeng.

His Excellency, the President of Republic of Botswana, Lieutenant General Seretse Khama Ian Khama officially opened the meeting as he was the guest of honor. The Council of Ministers meeting also coincided with the Chairmanship of Troika handover ceremony from Angola to Botswana as the hosts of the next 8th edition of the AUSC Region 5 Youth Games scheduled to be staged in Botswana, Gaborone in December 2018. It is the tradition of the Region to have the host country of the Youth Games minister to be the chairperson of the Region Troika (which is 3 ministers of previous host, current host and future host of the games.

The President in his welcoming remarks speech spoke a length about the importance of the role the AUSC Region 5 play in the collective effort and collaboration between the 10 member countries of the Region.

As a tradition, after the deliberations the ministers emerges with a final communique which is culmination of all the Region’s committees and commission’s deliberated issues of sports development for the

WE, the Ministers responsible for Sport of the African Union Sports Council Region 5 Member Countries, during the Council of Ministers meeting held in Gaborone, Botswana on 10 November 2017.

APPRECIATING the momentous investment by Member Countries in hosting the Region 5 Games and other sports events and tournaments, as well as for implementing the Region’s sports programmes and projects;

MINDFUL of the unrelentingly constraining global economic environment and its subsequent impact on dwindling sports budgets and the dire need to diversify revenue sources through commercialisation;

NOTING with satisfaction the determination by Member Countries to support athletes, coaches and administrators to attain excellence in sport at Regional, Continental and International competitions;

DETERMINED to build a strong case for transformation of sport into a viable and formidable business that directly contributes towards socio-economic transformation, peace and security in the Region;

NOTING with satisfaction the work done by the Executive Committee in reviewing the AUSC Region 5 Strategic Plan charting a prospective and sustainable trajectory for sport in the Region.

CELEBRATING the Region’s athletes who have left the world spellbound by their trailblazing performances on the international scene and Member Countries that have successfully hosted world class events and tournaments.

To this end, we UNDERTAKE to:

1.1          Consultation between the Region and Member Countries yet to sign the PPP MOU be intensified for a country based solution and that outstanding countries be assisted and supported to sign the MoU by February 2018.

1.2          The Region 5 Council of Ministers Chairmanship be handed over to Botswana with effect from 10 November 2017 in line with the provisions of Article 31.6 of the Region 5 Constitution and that subsequently, Angola and Lesotho become members of the Troika of Ministers for the period 2018 to 2020.

1.3          That the matter regarding enlisting of services of an Event Management Company be deferred and that the Secretariat work with the Troika on refinement of this proposal for presentation in the Extraordinary Council of Ministers meeting of 2018.

2.1          The Executive Committee Chairman’s report on the activities of the Region including all recommendations contained therein as amended by Council of Ministers.

3.1          The Audited financial statements for the year 2016 and the reappointment of Grant Thornton Botswana as the Region’s 2017 Audit Firm

3.2          The mechanisms as recommended by the Troika and the mechanism of penalties in relation to attendance to Region 5 meetings by Ministers.

3.4          The Governance Documents as recommended by the Executive Committee.

4.1          Efforts made by the Secretariat to gradually migrate towards a paperless office and plead with Member Countries to support this initiative.

4.2          The list of people due to be conferred Ten Year Service Awards and the need for Member Countries to support this Regional initiative by bringing forward deserving cadres.

4.3          Successful hosting of the 7th edition of the Region 5 Youth Games by Angola under extremely difficult economic circumstances.  We commend and congratulate Angola for remaining committed to the Region against an overwhelming weight of adverse financial challenges.

4.4          The positive state of preparedness tabled by Botswana on the 8th edition of the AUSC Region 5 Games and prospects of a memorable Games as well as invitation for all Member Countries to sign participation certificates as confirmation of their participation in the Games.

4.5          The need for Region 5 Member Countries to consider bidding to co-host the 2019 African Games in order to make the task cheaper in view of the limited time and budgetary implications of hosting the event.

4.6          The expression of interest by Zambia to host the Regional Museum and that a final decision to be communicated after consultation with the relevant authorities in Zambia.

4.7          Progress made by Member Countries in advancing sport development and High Performance and encourage members to give heightened attention to and investment in infrastructure development and refurbishment as well as support for athlete and coach excellence in our countdown towards major Regional, Continental and International sporting competitions.

4.8          The Ministers who attended MINEPS VI in Kazan, Russia and commend their commitment and contributions on behalf of the Region and that the Secretariat would engage the African Union for guidance on the protocol relating to the hosting of Regional Conferences.

5.1          Botswana for committing to hosting of various sporting events and competitions including the 2018 Region 5 Youth Games scheduled for December 2018.  Now that the Chairmanship of the Region will be residing in Botswana, we have renewed elation that the new Council of Ministers Chairperson will give heightened attention to supporting the functioning and status of the Region.

5.2          The Regional Organising Committee (ROC) for working with the Botswana LOC in ensuring successful delivery of the Games and pledged to support the Region in guaranteeing continual growth and development of the Games as the Region’s flagship.

5.3          Angola for appointing a new female Minister of Youth and Sport and that the development is in line with the Region’s policy of women empowerment.

5.4          The Botswana Head of State, His Excellency Lieutenant General Dr. Seretse Khama Ian Khama for setting aside time out of his busy schedule to officially open the Council of Ministers meeting.  Council of Ministers further expressed gratitude to the Government and people of the Republic of Botswana for the generous hospitality extended to them during their stay in Gaborone.

THE FOLLOWING COUNTRIES WERE REPRESENTED BY THEIR MINISTERS

THE FOLLOWING COUNTRIES WERE REPRESENTED BY THEIR OFFICIALS