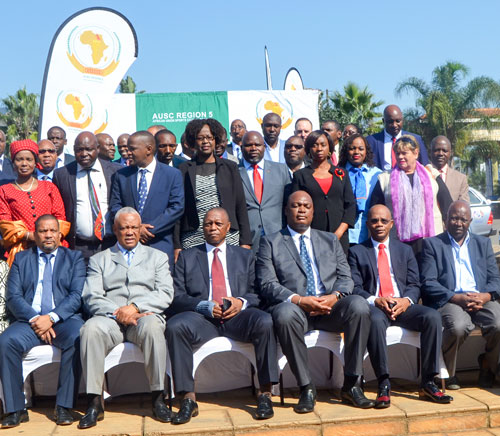 The first edition of the 2017 AUSC Region 5 Executive Council meeting wrapped up successfully following a series of meetings which culminated to the two days seating of the Executive Council. The meeting had representations from all member countries which was an indication that the Region work is taken serious and yielding results in the various member countries.

The meeting was hosted by Swaziland member country, at Ezulwini, Happy Valley Hotel. The official opening was braced by the Minister of Sports Hon. David Ngcamphalala who welcomed the guests and wished the executive council a progressive deliberations. At the ceremony a Setswana traditional group performed which was interesting given that the meeting was organised by Swati’s. However this was a confirmation that Swazi people embrace each other cultures in the region.

On a sad note, the meeting took place during the sad passing of Mr Herbert Nkabiti, a Botswana professional boxer who collapsed in the ring on Friday 28th April. He then sadly passed away later. The meeting held a moment of silence in commiseration of the passing of this sport luminary from Botswana.

This biyearly gatherings usually commence with the meeting of two committees; the Sports for People with disabilities (SPWD) and Women in Sports then followed by Sports Development Technical Commission (SDTC) and Finance and Marketing Commission meeting. Deliberations of these meetings are then tabled for consideration at the Executive Council meeting. The series of meetings normally takes one week however the preparations take at least two weeks to prepare reports and critical documentation to inform the meeting.

At the meeting, the CEO, Mr Stanley Mutoya on his opening remarks mentioned that the office was moving with times and this was the last meeting where files would be printed for delegates. In future all our meetings would be paperless, meaning delegates would be sent all documents on soft-copy and hardware would be provided for people to access their documents online if need be.