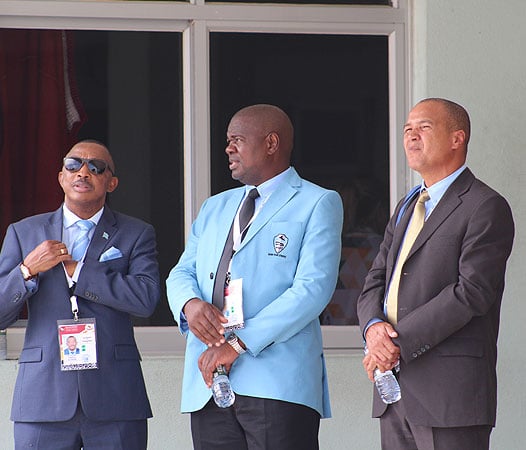 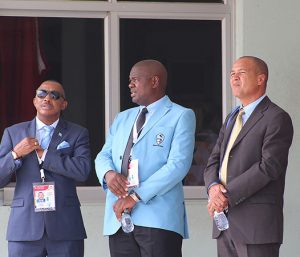 Following the successful hosting of the 7th edition of the AUSC Region 5 under 20 Youth Games in Angola, Luanda, the 8th edition is set to be a bigger and better sporting extravagance yet to be seen in the land of Botswana. This was said by the CEO of Botswana National Sports Commission (BNSC),  Mr  Falcon Sedimo when accepting the host flag on the behalf the Minister of Youth, Sports and Culture,  Honorable Thapelo Olopeng at the closing ceremony at Coqueiros Stadium in Luanda.

During the flag handover ceremony Rra Sedimo said “Botswana will host the 8th edition of the AUSC Region 5 Youth Games and the country to ensure the event is hosted in true Batswana style: perfection and immaculate staging of events.

The AUSC Region 5 under 20 Youth Games is one of the major regional sporting event and some have called the event “the regional Olympics” because it involves 7 different sporting codes competitions between 10 member states of the region. The organisation of such even requires immaculate organizational planning and thorough preparations because the legacy impact of hosting such an event has life changing and positive impact on the ordinary lives of the youth of country.

In Zambia in 2012 and Zimbabwe in 2014 new international standard and qualifier swimming pool were built in both countries. In Angola 2016 a new Athletics track was layered at Coqueiros Stadium as the direct investment by the government. The benefits of hosting these games for the country are straight forward and immediate; the events makes it possible for the country to start its programme of producing world class athletes that will represent their country at international platforms such at Common Wealth Games and the Olympics.

The hosting of an event of this magnitude brings together about 2000 athletes and technical officials during pre-planning, during competition and post competition for debriefing and closure of the games. The host country benefits from tremendous spin-offs and the positive impact on the economy as the event injects life in the various industries, including transport- local taxes and air-travel, hotel and accommodation, restaurants and other industries connected to sport tourism.

One has to admit though that the staging of the 7th edition in Luanda happened under very difficult conditions and for some athletes and officials.

However, the government of Angola was committed to host the games despite the current economic challenges. Speaking at the last debriefing meeting, the AUSC Region 5, CEO, Mr Stanley Mutoya acknowledged that Angola hosted the games under very difficult economic conditions and that led to many challenges including shortage of quality accommodation, poor stadiums attendance, and lack of publicity and marketing which led to poor visibility of the tournament.

Mr Mutoya praised the Angolan government for not backing out of hosting the event sighting the obvious economic melt-down caused by global low oil price and other global economic phenomenon faced by Angola as a country. “I commend the His Excellence, the President of Angola for putting up a fight, for his patronage and ensuing that the 7th edition of the games is hosted despite the Angolan terrible economic conditions, the country has shown a true spirit if solidarity and resilience as Africans”, said Mr Mutoya.

As we enter 2017, we are now geared to start the preparations for the 8th edition that is set to be hosted in Botswana, Gaborone in 2018. If the standards of the previous events hosted by the Botswana government is anything to go by, then the bar will be raised higher in 2018 and one can only start thinking what will Lesotho do when their turn comes to host  comes in 2020.