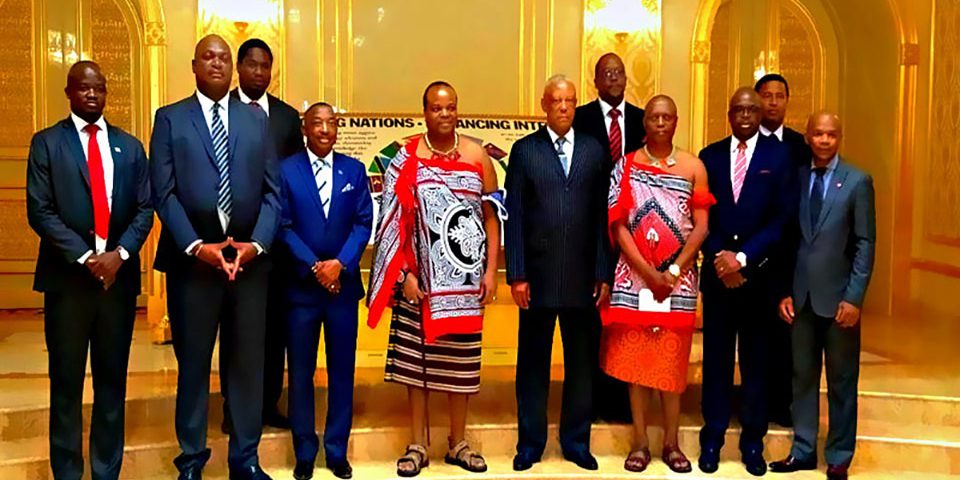 His Majesty King Mswati III and SADC Chairman welcomed the AUSC Region 5 incoming Troika Chairperson, Hon Thapelo Olopeng, the Minister of Youth Empowerment Sports and Culture Development of Botswana accompanied by his secretariat, the Chairperson of AUSC Region 5 Dr. Veii , Deputy Chairman Mr. George Jana and the Region’s CEO, Mr. Stanley Mutoya. The special meeting took place at Emandulo Hall, in Swaziland.
The meeting was a courtesy meeting to congratulate His Majesty the King Mswati III for his election to be SADC Chairman. According to the SADC Protocol on Culture, Information and Sport, it recognizes the AUSC Region 5 to be the implementing arm for all SADC sports programmes. This protocol was signed by all 10 member states presidents in 2001 in Blantyre, Malawi. His Majesty was excited to be reminded of his signature is on this binding document. He mentioned that he will do all in power to see sports development taking a center stage in the SADC agenda going forward.
He acknowledged that in most of the SADC member states, more than 50% of the population is below the age of 35, meaning it’s a young population still looking for economic development opportunities. Sports development and promotion should be used to create jobs opportunities and help grow the entertainment industry that will help reduce social ills such as poor health, alcohol abuse and youth empowerment.
King Mswati III is well known for his passion and initiatives in sports development through his sports programmes in Swaziland such as Imbube Marathon, Ingonyama Cup and Kings Golf Cup, where international teams and players were invited to take part in these sports events in Swaziland.
Now that The King is the Chairman on SADC, it is expected that his passion for sports will be emulated to all member states of the Region.